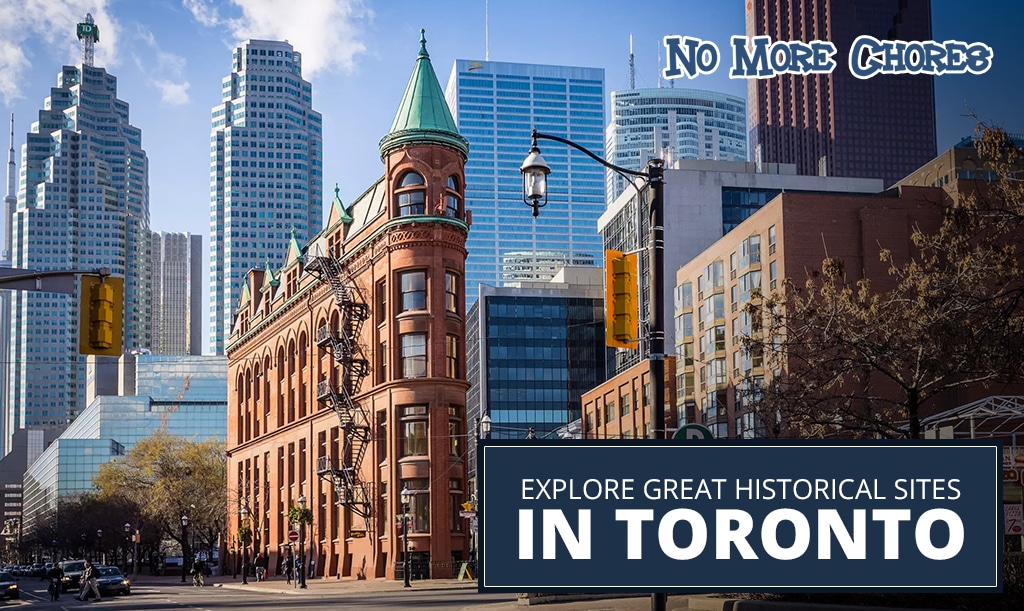 Looking back into the past of a region often makes it far more interesting than if you were just passing by. That’s one of the best things about Toronto, where many of its historical sites have blended so organically into the modern commercial and tourist districts that have flourished around them, sometimes even becoming a part of them (as you’ll see in our first entry).

Toronto is a huge, clean and tidy cosmopolitan city that draws in visitors from all over the world, but if you look just below the surface, you’ll find many juicy stories waiting to be heard by the next generation of tourists. Any self-respecting history buff will love all of these historic sites, so next time you’re visiting the city, make sure to stop at all of them since they’re some of the most unique things to do in Toronto.

Who would have imagined that clean-cut Toronto had a heavy, bootlegging past? Well, there’s proof down on the Victorian architecture of the Distillery District, were the mills, old brewery buildings, and cobblestoned walkways have made way to gourmet restaurants, fancy boutiques, and of course, plenty of craft breweries that keep the city’s booze-filled traditions alive and well (and perfectly legal!). On top of the modern locales and the classy-looking architecture, many events take place in the are, so check it out!

Housing over 120 vendors, merchants, and artisans, the St. Lawrence Market Complex has served as Toronto’s culinary heart and focal point, as well as an anchor of the community for well over a century. Formerly known as the St. Lawrence Market Block, the building is now divided into three different parts; The South and North Markets, and St. Lawrence Hall. The South Market is the main level and features all sorts of specialty vendors selling every kind of food item you can imagine. The North Market is where you’ll find over 80 antique dealers and the showroom space. Finally, St. Lawrence Hall occupies the third floor, and many retail businesses and ancillary rooms are housed up there.

Another great example of historical buildings merging seamlessly with the modernity around them, the UT was founded in 1827 and is an obligated visit for any lover of classic architecture, since the main campus features a variety of styles ranging from Gothic to Victorian, not to mention the many sculptures, pathways, green spaces and glass windows that accompany them. The Gothic Revival Soldiers’ Tower is also worthy of a visit, as is the Brutalist-style Robarts Library. Don’t forget to make a stop at the Thomas Fisher Rare Book Library, which houses 700,000 volumes of original volumes that any history-loving bookworm will fall in love with.

Historical villages can be pretty cool when done right, and the Black Creek Pioneer Village is the perfect example. Recreating a traditional 1860s village, and featuring over 30 restored original buildings, you’ll be able to take a long look at how the families and craftspeople of the day went about their daily life, and proving that, while infinitely busier, our lives are way easier. There are weekly programs for children to take a tour around the village learning how to bake and even roast chestnuts during the holidays.

Serving the good people of Toronto since 1853, the Black Bull has survived everything from the changing tastes from all sorts of patrons over time to a couple of fires that burned the rest of the city to the ground. If that hardiness and sense of history don’t convince you to grab a drink and a bite with them for a while, you might like to hear that some people say the best poutine in Toronto can be found there. We’ll let you decide.

Fort York was constructed under the orders of John Graves Simcoe as a military garrison for the British army back in 1783 and has since then gone through a very hectic-yet-interesting history, being captured, recaptured, burnt down, rebuilt, and repurposed for centuries. Nowadays, all the action it sees comes from tourists trying to get a glimpse of Canada’s military history, and perhaps a cool selfie in front of the many brick walls and canons lying about. A well-deserved era of peace indeed!