Amazing Facts About the CN Tower You Likely Didn’t Know 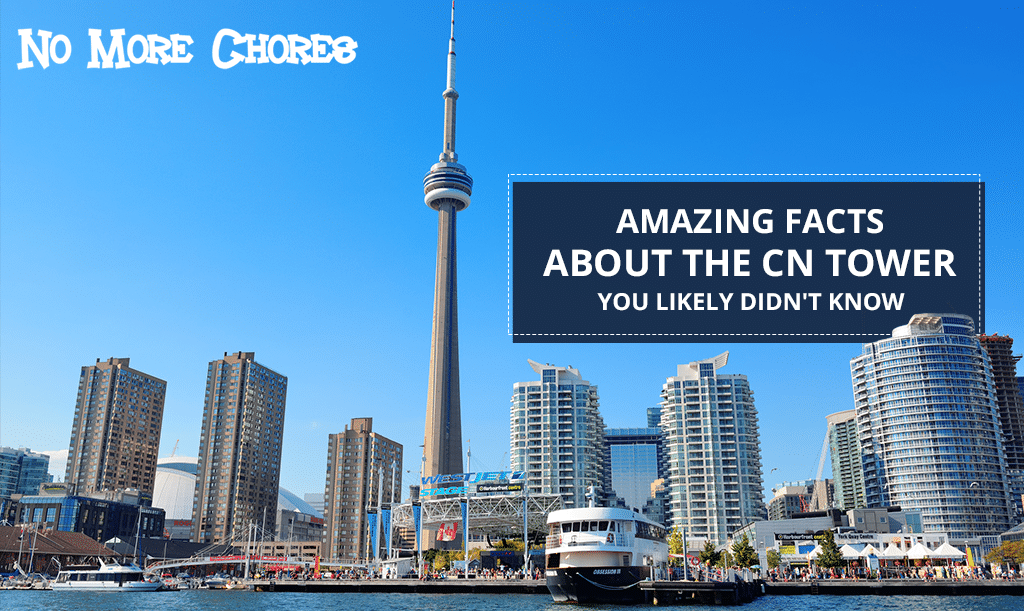 One of Toronto’s most famous and beloved landmarks, the CN Tower, offers visitors a spectacular view of the city when going up it, and especially from the top. For both first-timers and seasoned Toronto tourists, it is also an obligated stop like the Eiffel Tower is for Paris or the Statue of Liberty is for New York City, and this is precisely what might be convincing you of just skipping it for your tour. It’s just another lame spot for tourists, right?

Absolutely not! Popular as it is, the CN Tower is more than just a flashy building to serve as the background of a travel selfie. It’s an engineering marvel in many ways, and you’ll find plenty of fascinating facts about it from both inside and out. We’ve collected some of the best bits of history and information about the tower to convince you that yes, you definitely shouldn’t skip it during your next Toronto trip. Check them out!

At 1,815 feet (and 15 inches) CN Tower isn’t just the tallest structure in Toronto or even Canada; it remains the tallest free-standing structure in the entire western hemisphere, including all of continental America. The American Society of Civil Engineers named it one of the “greatest civil engineering achievements of the 20th century” in 1995 when choosing the “new Seven Wonders of the World.” And it now stands just behind the Canton Tower and the Burj Khalifa as the tallest structures in the entire world, and it actually was the tallest up until 2007, a record it held for over three decades.

It’s a paradise for thrill-seekers

If you are a natural thrill-seeker, then you’re already aware of the potential of the CN Tower, and you’ll definitely love EdgeWalk. There’s a 5 ft wide ledge encircling the top of the tower’s main pod, and you’re able to walk around it completely hands-free while harnessed only to an overhead safety rail and trolley system. Think the guides are gonna give you an earful about staying close to the wall? Think again; EdgeWalk guides will motivate you to push your limit and lean over the edge to take in the breathtaking view that you won’t be able to get anywhere else. The whole experience is, of course, designed with the highest safety standards, so the only thing you’ll have to conquer is your fear of heights.

How can such a gargantuan free-standing structure remain in place so seamlessly? It does so thanks to its 1200-foot hexagonal core, which also provides stability, so much that it’s reportedly able to withstand an 8.5 earthquake on the Richter scale, and strong winds up to 260 mph. It is so tall and visible that it has to dim its exterior lights during bird migration season to prevent them from getting injured. You’d think this would be a problem during lightning storms, right? Well, in a sense; lightning strikes the CN Tower about 75 times every year, but copper strips connect the tip to the grounding rods buried underneath the base, keeping it safe at all times.

The Glass Floor can hold the weight of 14 adult hippos

The famous see-through floor in the CN Tower is not only so clean that you’ll want the same for your windows at home. When it opened in 1994, the CN Tower’s Glass Floor around the Observation Deck was the first of its kind in the world, so the builders weren’t about to leave safety up to chance. The 256 square feet that comprise the glass floor can hold five times as much weight than what is legally required of any type of commercial floor, which means that, if 14 hippos found themselves all the way up in the Observation Deck, the glass floor would be able to resist their weight without a hitch. For those trying to do the math, 14 hippos are equivalent to about 35 moose.

It holds an amazing amount of sky-high wine

Enologists, rejoice. The CN Tower is also home to the “wine cellar in the sky,” which rests inside the 360 Restaurant that revolves atop the tower. It holds the title of the highest wine cellar in the world from Guinness World Records and can hold up to 9,000 bottles. In our opinion, it should also hold the title of the fastest wine cellar, since the 360 Restaurant completes a full rotation every 72 minutes and offers an incredible view of all Toronto to its customers.

We could go on, but we’re pretty sure this list of CN Tower facts and history and things you should know before climbing the CN Tower has made you look at this classic Toronto landmark under a different light. No doubt this will make you choose to visit it (either for the first time or again) during your next trip to our beautiful city.